Thanks again to our friends at www.SharkIndicators.com for the following guest post.  If you missed part 1 and want to check it out, CLICK HERE

Last week we covered some basic ideas on building your own trade system.

Have you ever tried to build a system from scratch? I know, it can sometimes be a little daunting - like being a writer faced with a blank white page. Starting from scratch is a little intimidating.

Unlike a writer however, you don’t have to worry about being “original” to be successful. Traders often build from ideas they get from other traders (sometimes experts) on the web, from books or from youtube videos... and no, I’m not talking about the Harlem Shake.

One of the best things to do I find is simply to open up a chart and throw up some common indicators, and observe.

Now you should be forming some ideas that need to be tested out. At this stage we don’t need to strive for finding that magic characteristic that is happening every time there could have been a winning trade. Just look for a few different characteristics that appear to be in common before an ideal move.

Likely you’ll have a few ideas consisting of a bunch of different indicator’s and their corresponding behaviors.

We’ll have to test them.

However, trying to figure remember the state of one indicator while you look at another to confirm a good trade setup can often make you cross-eyed. This is where a tool like BloodHound comes in real handy.

This week, we are going to look at layering multiple elements together to arrive at a trade signal, and we’re going to build on where we left off.

Last week we covered some basic ideas when building a trade system from scratch. We decided on how to identify a trend using higher highs and higher lows, the idea being that generally speaking you want to trade with the trend, not against it... right?

Here’s an example screen to recap what that looks like. We have a crude oil chart up in NinjaTrader using BloodHound to mark the trend from Bullish (Higher Highs and Lows) versus Bearish (Lower Highs and Lows). In the screen below you can see red zones for the bearish trend and green for the bullish trends. 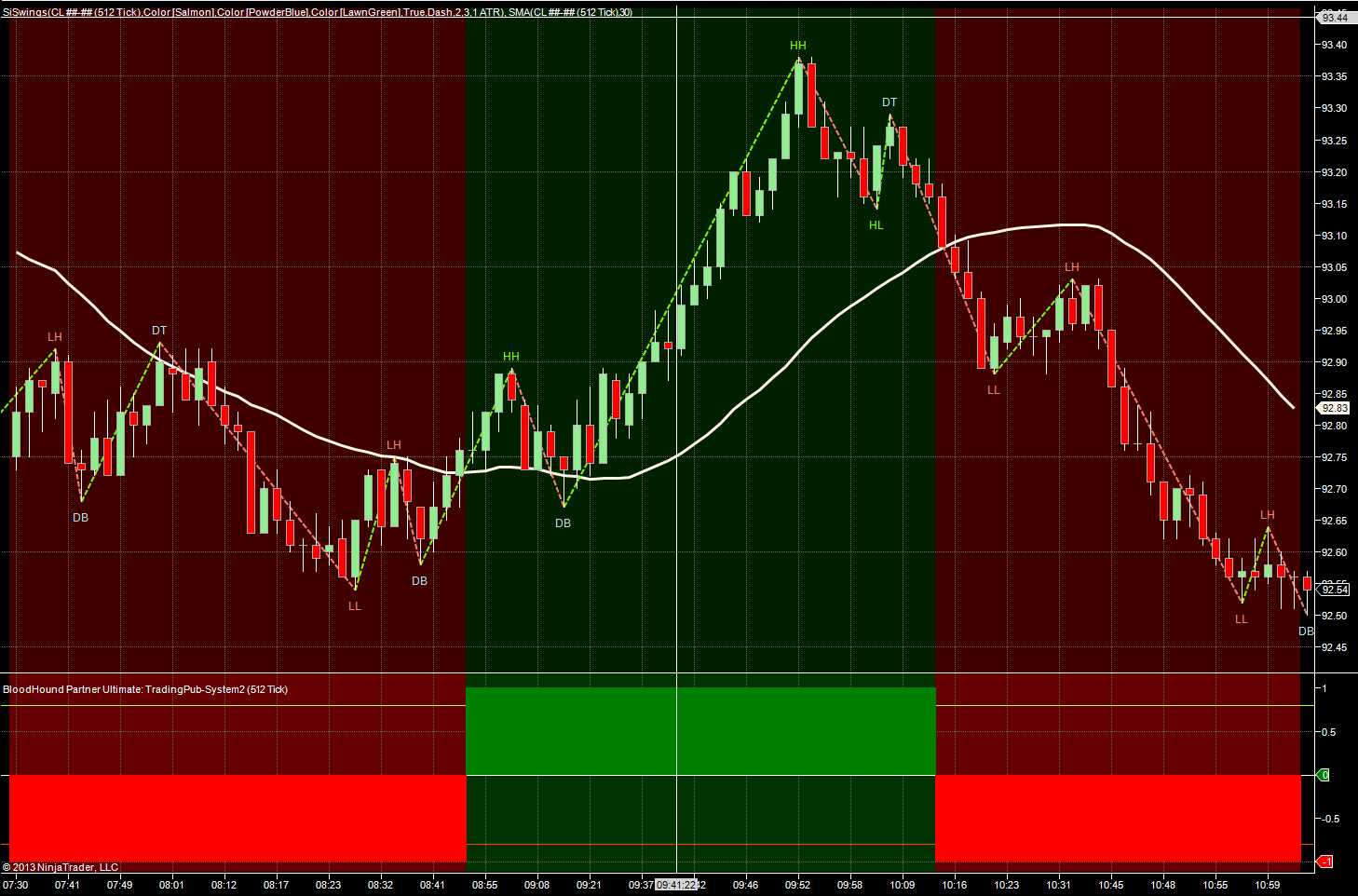 Layering In A Simple Entry

Of course defining a trend alone is fine and dandy, but it’s still not a system.  We need to define when to actually get in. To do this, we’re going to keep it simple.

We’re going to experiment with a simple 30 SMA cross entry and see what that looks like. If you look closely at the chart below, you can see a thick white line across the bar chart. This is the simple moving average line, SMA(30). You can also see we’ve instructed BloodHound to mark the areas where price crosses above the SMA(30) with green and the where price crosses below the SMA(30) in red.

The idea is simple, when the price crosses above the SMA(30) (ie: a green stripe) go long, when it crosses below (a red stripe), go short. 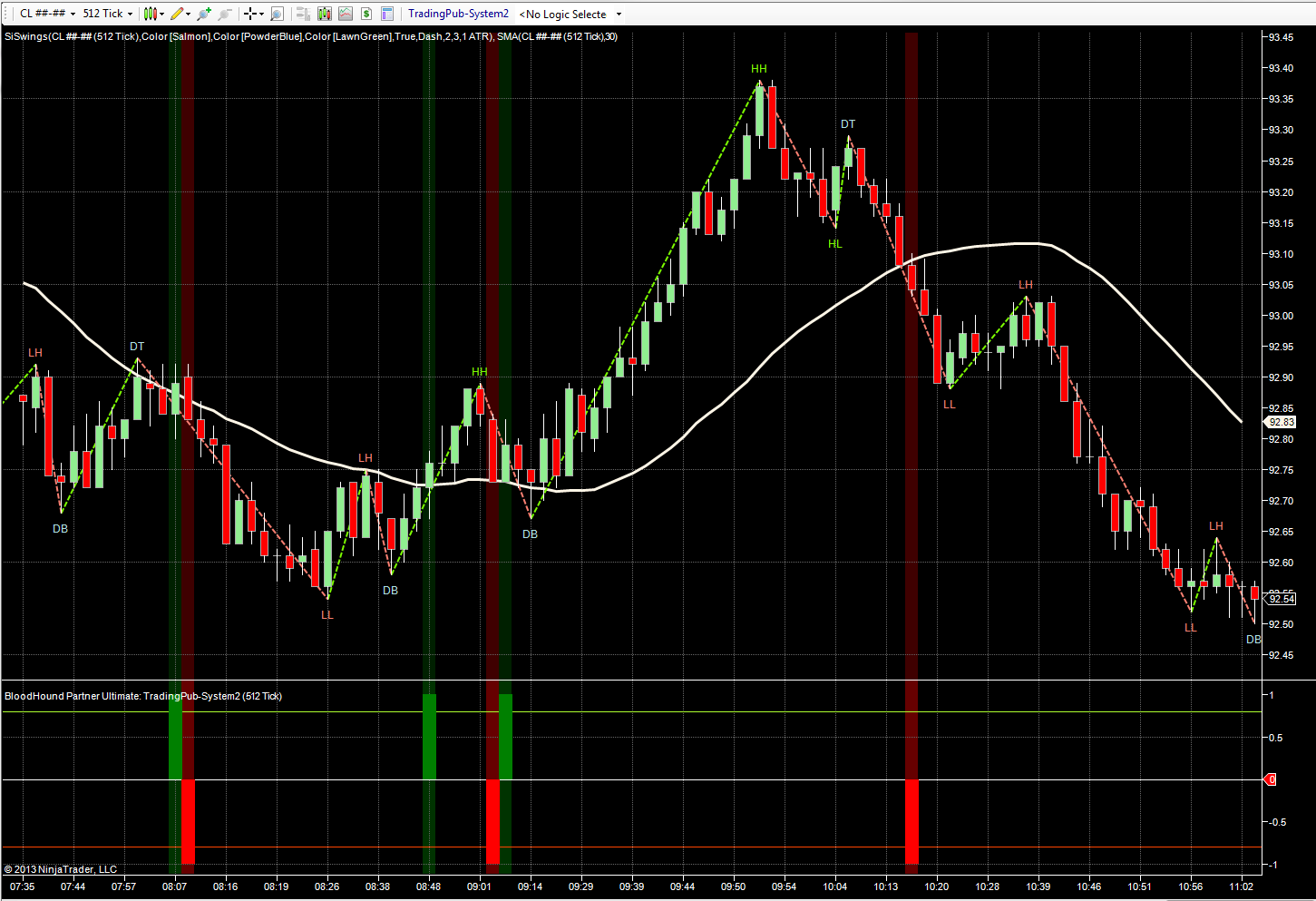 You’ll notice immediately that using the SMA(30) cross as an entry signal could be problematic. At 8:07 and 9:01, the price bars are hovering near the SMA(30), causing entries to fire up and down. Naturally, no trader wants that action to chop up their account!

So lets combine the two, and see what it looks like when we filter out the entries that don’t agree with the current price swing trend, as established in our previous screen. To do this we can use BloodHound to quickly see what that looks like.

Opening up the BloodHound interface in NinjaTrader, we just need to add the two simple criteria together, the trend directions (seen as the Dorshden Swing Trend below) and an Indicator cross-over to mark when the price has crossed the SMA(30). 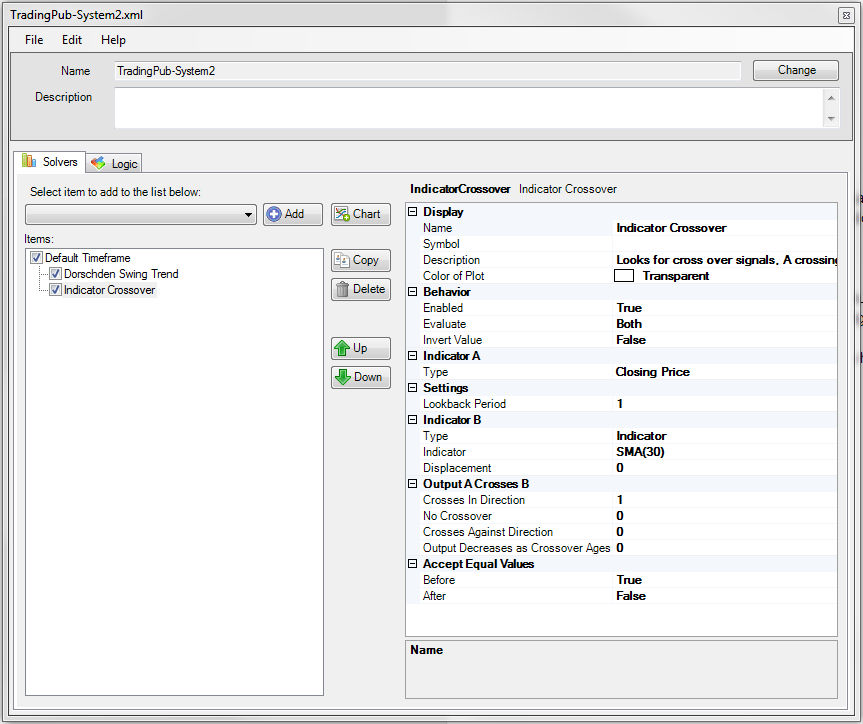 A few mouse clicks later, now have a chart that looks like this: 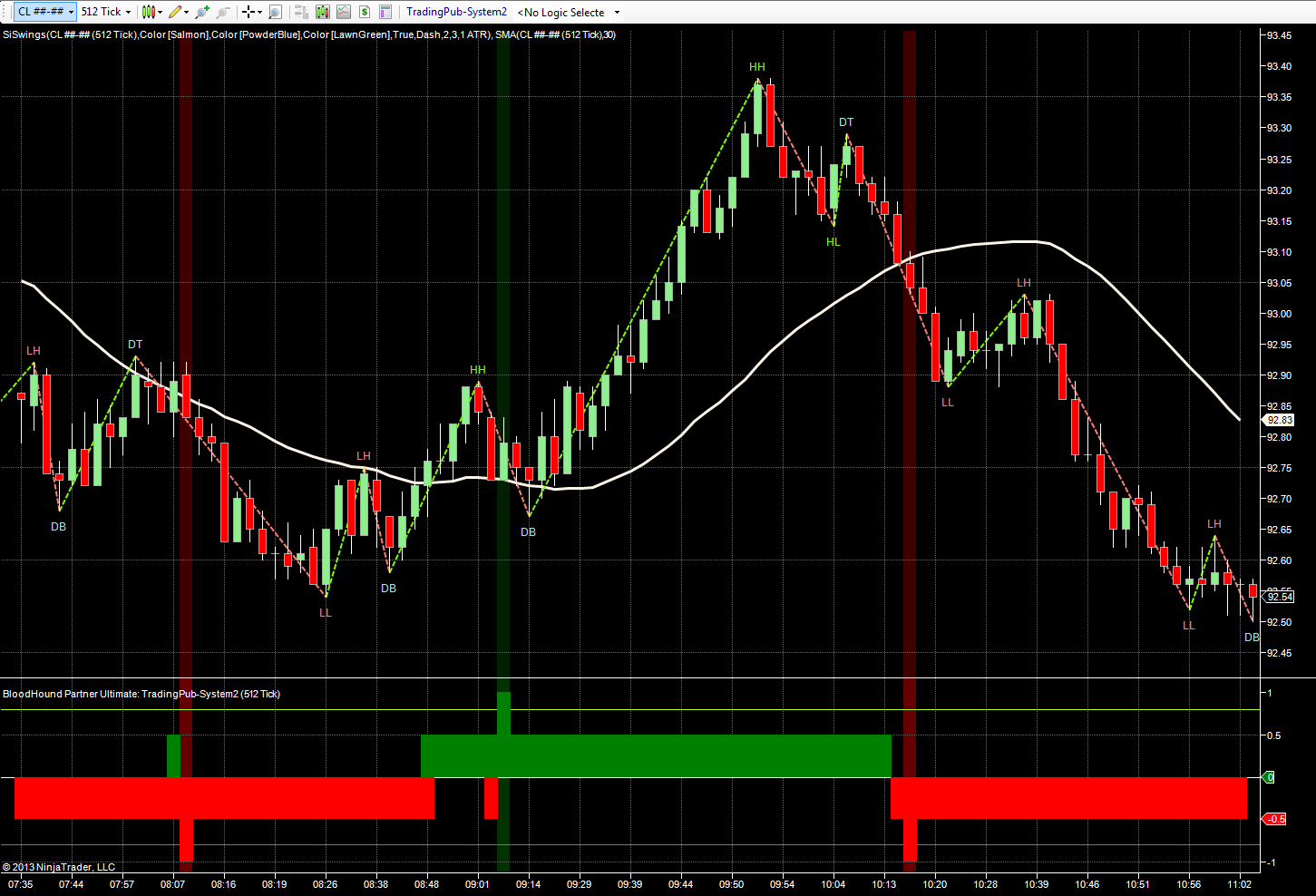 As you can see this is much better!  Looking back however, this system has reasonable entries when the market has some decent volatility to it. Where it suffers, like many similar trade systems is when the market is trading in a narrow choppy range.

While we still have some work cut out for us (read as: test, test, test), we have the beginnings of a workable system and we’re well on our way.